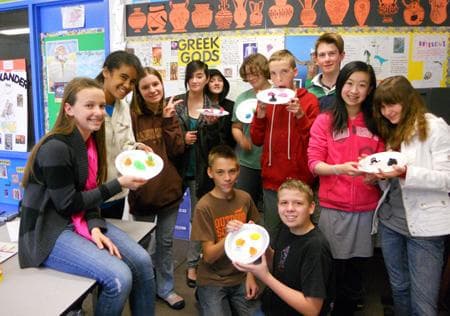 He who gets wisdom loves his own soul;
he who cherishes understanding prospers.
~ Proverbs 19:8

Schools of grammar, logic, and rhetoric at a glance

Live Oak Academy’s Language Arts courses emphasize the study of classic literature, traditional grammar, and thoughtful composition, with an eye to the true, the good and the beautiful. In the School of Grammar, students are equipped with all of the tools needed to become perceptive readers and competent writers. Logic and Rhetoric stage students build on these skills as they actively engage with the text and read with discernment. As writers and speakers, students in the School of Logic learn to take a position and defend it with well-supported arguments. As they progress through the School of Rhetoric, their arguments increase in complexity as they hone their critical reading and thinking skills.

Grades one through twelve survey World History, and especially Western Civilization from ancient times to the modern day. While attending Live Oak Academy, students will study this history sequence three times, in increasing depth and complexity. At each level, students will be taught to see history as God’s unfolding plan for the world and appreciate His working in the development of civilization. The chronological study of history parallels the study of literature.

Mathematics displays God’s systematic and orderly nature. Teaching math from a Christian worldview requires that the teacher regularly connect the glory of math and how limitless the study of math can be. As the student transitions from the concrete, grammar stage to the abstract, logic and rhetoric stages of math, students should be taught from the perspective that God created an orderly universe, and that math reflects that order.

The belief that science is a reflection of God’s incredible complexity and design forms the core of Live Oak Academy’s science curriculum. In their exploration of science and its laws, students also are encouraged to understand theories and conclusions, guided by the belief that God provides insight into His creation. Through each stage of growth, students will be taught to explore the wonders of God’s handiwork that reveals the seen and unseen.

As a classical academy, training in Latin at Live Oak Academy is both a means to an end and an end in itself. Students acquire valuable knowledge about the structures of language and syntax, and their study of Latin vocabulary also enhances their ability to understand word roots in English and other derivative languages. For a fuller explanation of why Latin is inherent to the purposes of a classical education, see Why Learn Latin?

The teaching of Christian virtues and Bible memorization start from the beginning, in Kindergarten and the primary grades. In grades 4-6 a three-year Bible survey course is taught, covering the people, events, and geography of the Old and New Testaments, and deepening the students’ understanding of familiar Bible stories. In grades 7-8, students explore the Biblical and logical foundations for Christian doctrine and belief. Finally, in the School of Rhetoric, students study Biblical exegesis and the skill of Christian apologetics.

Our purpose in teaching Fine Arts is to foster in our students a love for what is good, true and beautiful, as befits a classical Christian and liberal arts education. Participation in Fine Arts is encouraged at Live Oak where students learn to read music and give praise and worship to God through song. We offer four choirs: K-1 Choir, Elementary Choir (grades 2-6), Classic Choir (grades 7-12), and Choral Ensemble. Art projects, art instruction, and art appreciation are incorporated into the curriculum in various ways throughout grades K-6.